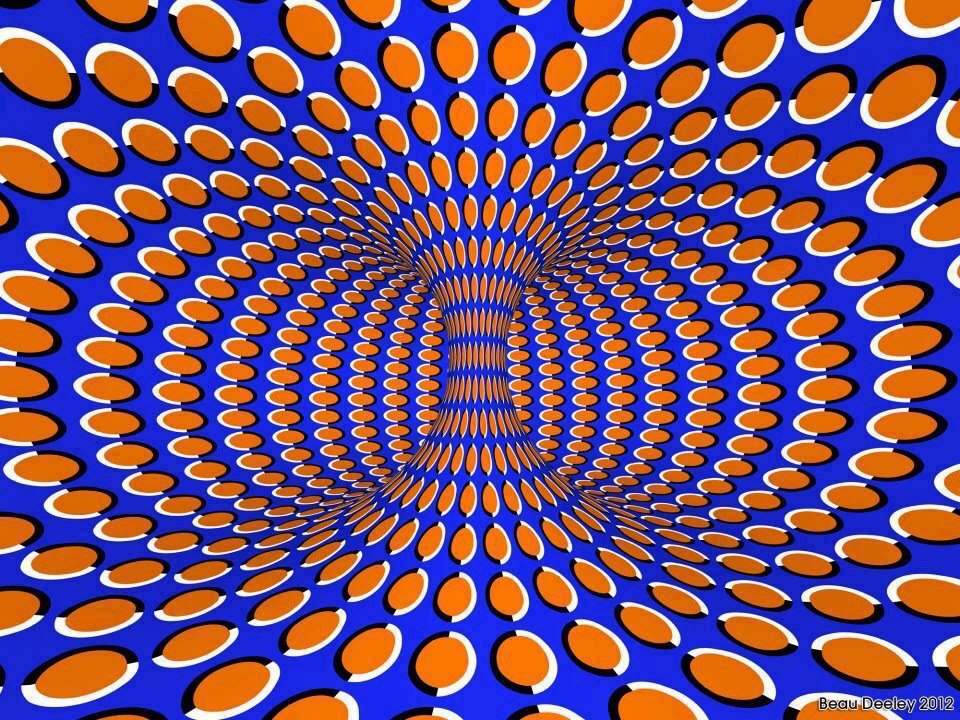 We’ve all heard the phrase “What you see is what you get”. But is that always true? Can our eyes deceive us? We’ve all seen countless optical illusions, maybe seen the show “Brain Games”, or have experienced our senses tricking us. But let’s remind ourselves of how powerful these illusions can be.

Watch the image above for a few seconds.

Does it appear to be moving? If it doesn’t, you might be on too small of a screen, but generally you should see it moving. According to the American Museum of Natural History Website (https://www.amnh.org/explore/ology/brain/optical-illusions-and-how-they-work/filling-in), “The illusion is triggered by eye movements. Even when you stare at a still object, your eyes dart around. Normally, your brain can tell the difference between your eyes moving and an object moving. But because of the strong contrasts and shapes in the illusion, your brain gets confused. Your motion sensors switch on, and the image seems to turn. Your brain evolved to focus attention on movement because it can be a sign of danger. But in the case of this image, the movement you see is an illusion created in your mind!”

Here is a classic example, do you see a duck or a rabbit?

If you’re having trouble with this one, try tilting your head 90 degrees counter-clockwise, then upright again.

This amazing illusion is an elaborate 3D painting on a city street.

But it isn’t just our eyes that fool us. To borrow another example from the American Museum of Natural History’s Website, make sure your sound is on.

Click “Play Audio” on the sound clip below while looking at the image below the buttons. What do you hear? Listen for a few seconds.

Taste can also deceive us. Have you ever picked up a glass of sprite thinking it was your water? It will taste awful, even if you normally like the sprite. Why? Your brain was expecting a different taste. Your brain is deceived even though you have had both beverages many times before.

Or, have you ever noticed that some foods make other foods taste different? For example, I don’t like to sweets with my coffee because it makes my coffee taste more bitter. Some like it that way, but the point is, the taste appears to have changed when in actuality, only your perception has changed.

Take physical feelings, for example. I remember when I was about thirteen my parents took me to Universal Studios in Florida. We went to the Alfred Hitchcock theater. They showed clips of movies along with historical information. I was very nervous, having been very sheltered from movies as a child. I had never even been allowed to watch more than one or two pg-13 movies and I had definitely never seen a horror movie. During a clip from “The Birds”, they blasted air at us while the birds appeared to fly over our heads in 3D. The air mimicked the feeling of wings whipping your face and body. That feeling, combined with the scenes our eyes could see made it feel real. I really felt as if birds were attacking me and I was scared to death even though I knew intellectually it was a movie and I was never in any harm. Then we went to the Hannah Barbara exhibit where they showed clips of “The Jetsons” in 3D while we sat in a car-like seat. As the movie played, the car rocked back and forth, giving us the feeling of flying through space. Yet, in actuality, the seats never moved. And lastly there was an alien exhibit. I don’t remember it too well except that it was completely dark, and we could not see a thing. But they described the aliens that were coming behind us. We could hear strange sounds and our imaginations began to run away from us. Then, when we least expected it, they poured very moist air on the backs of our necks that felt like slime as they described the aliens breathing on us. It felt so real!

The Bible says that “The heart is deceitful above all things, and desperately wicked: who can know it?” (Jeremiah 17:9).

Yet, we are absolutely convinced most of the time that what we experience is real. There are many other examples, and I am sure you could think of a few. Sometimes it is a clear deception of our senses as in the examples above. Other times it is due to a lack of information. A few weeks ago, for example, I had just moved into a new house and was settling in. I hadn’t lived alone in nearly fourteen years. I didn’t have any fear though as I had lived on my own before, it was just unfamiliar again. I awoke suddenly on a Sunday morning out of a dead sleep to a banging so loud I seriously thought someone was breaking down the house with a sledge hammer. My heart pounded out of my chest as fear rose up in me. Eternity secure, I’m not afraid of dying, really, but of being violently attacked. That was scary! After nearly ten minutes I began to think I had better go see what it is: I either had to face it or lay continue laying in bed scared out of my mind. Turns out, my storm door hadn’t gotten latched the night before. It was extremely windy that morning and the door was repeatedly banging against the house. I couldn’t believe how loud it had been. But you see, I genuinely thought I was about to be violently murdered and yet, when I discovered the truth, I was in no danger at all. I simply had lacked the information to know that. I simply needed to latch the door.

Today, the media tells us that we are a slave to our feelings and desires, that feelings are the compass of what is true. Though the media won’t often use the word slave, they will tell you are born that way and there is no hope for you. But you don’t become a slave having a thought. You become a slave to your desires when you entertain them and begin to fantasize. Eventually you will act on them.

But basing truth on something that is easily deceived and ever changing (such as your senses and feelings) is like trying to build your house in the middle of the ocean. You would never have any bearing, you would constantly be tossed about, and you would desperately want to find some kind of landmark to let you know where you are. There is nothing more maddening than being lost and having no idea of what direction to go. I imagine it would be even more so on the ocean where there is nothing but sky and water. You would have absolutely no reference point.

Truth, on the other hand, as Abdu Murray said, is rooted in a person, not in an idea. Jesus Christ is truth, and His Word is truth. It is absolute. It never changes, and it never fails. Isaiah 40:8 “The grass withereth, the flower fadeth: but the word of our God shall stand for ever”. Man’s perception of it may change, man may lose faith in it, but the Word never changes. And those who do trust it over their feelings and desires will find it far more trustworthy than what they feel. The Word of God will anchor you in the storm and guide you safely home.