They Have Sown the Wind 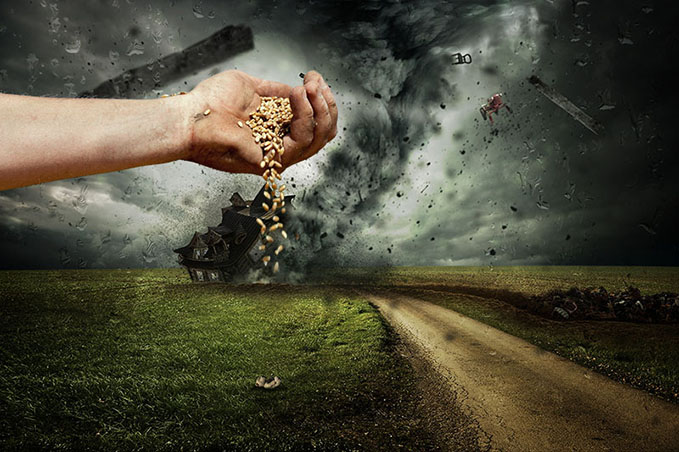 Have you recently perused a favorite news site or tuned into the nightly news and thought to yourself: The World has gone mad! Years ago, when I began my journey to what I believed would transition me from female to male, I had slipped into a dark and hidden world that was veiled in secret from the minds of the average citizen. I felt protected in my own solace of identity. In barely more than a year, I had nearly erased the existence of Laura and had created not only a new identity, but an entirely new world around me. I had moved across town, found new employment, had surrounded myself with new friends and it was as though Laura had been secretly buried in the shadow of the night. Jake had supplanted her and taken over without scarcely a ripple outside the eyes of my family that were wise to the truth. I lived in what I called stealth: I lived not as transgender, but as if I had never been born female in the first place. I wanted to forget that I had been born female and I lived to find affirmation from others, cringing when anyone referred to me as female.

As the years on the calendar slipped away, I eventually realized that I could not be a man. No amount of surgeries or hormones were going to make me a man despite how much affirmation I received. I was only perceived as male, and yet I knew I was living a lie. Determined to forget I was female, however, I resolved to live life as a male to the best of my ability. I believed one day the memories of Laura would fade completely. For now (at that time), I was safe in the dark, enclosed cocoon of my male identity. For years no one questioned it.

But almost overnight the transgender issue had been launched as if shot out of a cannon from the dirty little secret of your everyday community to the spotlight of primetime news. As my transgender cohorts were demanding equal rights, I wanted it to all go away. I was incredulous at the attention it was all getting. I didn’t want transgender rights. I didn’t want this to be a front-page issue. I wanted to live my life as a man and avoid all suspicion. I didn’t want anyone to look at me and question if I was really a man. The irony of the transgender movement is that it exposed me. More than that, it exposed the insanity of what I had believed about myself.

In God’s sovereign wisdom, it was the insanity of it all that made me begin to hate it. Even as crazy as it seemed then, even I never dreamed the depths of insanity our nation and the global society at large would plunge into in the last several years. The stories now are even more insane than they were then. To focus the lens of our microscope a bit, let’s take for example, a recent story that has been making enormous waves in news media. It is one of the most controversial news stories available at the moment because it is forcing a collision between the otherwise sympathetic causes of gender-identity and racial equality. Many of the LGBT and progressive liberal community are celebrating the story of Martina Big as a champion of self-proclaimed identity, while others are hailing it as a blasphemy against racial equality.

Martina Big is a German-born Caucasian woman who struggled early on with body image. Much of the information on her story is taken from her interview with Holly Willoughby and John Barrowman on the U.K. morning news show called “This Morning” (linked at the end of this article). She admits that when she was younger, she admired the curves of Pamela Anderson. She repeatedly had larger and larger breast implants put in until she was an astounding 32S bust size. At first, she only wanted a summer tan to accompany her new “curves” to perfect her body. However, she soon became obsessed with tanning injections and over time, they worked a little too well, turning her skin extremely dark. It wasn’t just the skin that was darkening, but her eyebrows and hair as well. She claims her hair was not only darker, but was changing in texture as well and curling more.

Holly pointed out to her that the last time she had been on the show (they interviewed her multiple times to document her story), she had claimed to feel 80% a black woman. She seemed taken aback at this at first and was quick to correct. She interrupted her interviewer and stated “—No, it’s really 100%, I’m really sure…I’ve changed from white to black. But the problem is it’s hard to…I can clearly feel that I’m black, but it’s really hard to find the right words to explain [to] people who are not involved.” She is now convinced that she has transitioned from a white woman to a black woman. She believes that she has become black and went to visit Kenya for a few weeks to learn the culture. According to Mirror, “She travelled to Kenya to be baptized with a new Swahili name, claiming this made her “a real African woman”. The insanity of her belief has deepened as she is now convinced that she and her white husband, whose injections have made him quite tan but not black in appearance, will have a black baby.

Another case in point is that of Dutch man Emile Ratelband. Emile has angered the transgender population by making, to their dismay, a valid argument based on their logic and demands. It is not at all rational or sane, but it does bring to light the fallacy of their demands for equal rights based on their desire to change their identity from one that is real and verifiable to one that is fictitiously assumed. Emile is a 69-year-old man who wants to legally lower his age from 69 to 49. Before you scoff, consider: if age is fixed and not legally able to be changed, how can the transgender supporters claim that changing their gender is any more valid? Based on the logic of self-created identity, why can’t he claim he is 49? What if he had cosmetic surgeries to make his body appear more healthy? What if he had ailing body parts transplanted to give him younger parts? Would he actually be younger? According to an article on Ratelband in Time Magazine, his main reason for his desire was “When I’m on Tinder (a gay dating app) and it says I’m 69, I don’t get an answer. When I’m 49, with the face I have, I will be in a luxurious position.”

Sadly, he is not the only one to claim such a preposterous identity. A Canadian man named Paul was a married man with seven children when he became transgender at age 46. “Stefoknee Wolscht, [now] 52, of Canada, left [his] wife and seven kids to fulfill [his] true identity as a six-year-old girl.” (The Daily Mail). This is such a heart-breaking story. In the article from the Daily Mail linked below, he says “I can’t deny I was married. I can’t deny I have children…But I’ve moved forward now and I’ve gone back to being a child. I don’t want to be an adult right now.” Isn’t there someone in this man’s life who can see that clearly there is something he is trying to escape, something so painful he is reverting in his mind to a place of complete innocence where he can check out of reality and live in a fantasy world of his own creation? Sadly, a couple with a granddaughter, who was 7-years-old at the time, adopted him as a second granddaughter, pretending to be age-6. The two color together and “do kids stuff”.

In addition to these, there have been individuals who are identifying as non-binary, sexless, animals, aliens, and much more. Twenty years ago if someone had claimed to be transracial, trans-species, or trans-age, they would have been either committed into an insane asylum, or at the very least, dismissed as the town loon. The demands of acceptance and affirmation of the transgender community, however, has put the brakes on such judgments. Emile Ratelband’s argument is that if transgenders can change their gender, why can’t he change his age? And while I don’t endorse or suggest that our laws accommodate either, to his point, why shouldn’t he be allowed to change his age?

Dr. Everett Piper, President of Oklahoma Wesleyan University and the man that helped me see and accept the truth about who I was, often says “ideas have consequences”. God said this a little more colorfully to the prophet Hosea, saying, “they [Israel] have sown the wind, and they shall reap the whirlwind:” (Hosea 8:7). We cannot continue to sow insanity into our culture, into our schools, and into our children and expect to reap healthy, well-adjusted members of society. We are reaping a society in which people who are hurting and broken are being counselled into escaping reality rather than into finding healing. We must remind ourselves that there are real consequences. Children that are put on puberty-blockers and/or cross-sex hormones will likely become sterile in addition to a becoming increasingly at risk to a wealth of other medical problems. The long-term effects of cross-sex hormones has still not been definitively determined. We cannot play games with the lives of our children.

In Trans Life Survivors author Walt Heyer shares an email he received from a former transgender that is a common refrain I hear over and over: “After 19 years living as a woman, I realized my desire to change genders came from deep-rooted childhood trauma, sexual trauma, environment and family relationships.” (Heyer, p. 94). This is the reality no one is talking about. Every story I have ever heard of those that identify as transgender or some other trans identity, there is trauma in their childhood. Heyer goes on to address the reality of what we are allowing our children to decide and the chilling consequences it will bring about. “Children and adolescents should look to adults for sound counsel, and not be misled into consenting to treatments that eliminate a future that they cannot yet fully comprehend. How can a child or young teen truly consent to arrested sexual development, potential chemical or surgical sterilization, writing off the prospect of marriage and intimacy as enjoyed by their sex, of pursuing “pink clouds of happiness” when they don’t know a thunderhead from a wisp of cumulus?” (Heyer, p. 108).

The sad part is, no one will ever find freedom in living a lie. How is it loving to affirm a lie someone believes about themselves? How is it loving to allow them to mutilate their body rather than helping them find peace with their identity? The answer for the church is not affirmation, but the gospel of the resurrecting power of Jesus Christ to transform and set free. As many as there are new transgender-identifying individuals every day, there are also many that are being set free. And they all seem to say the same thing: there is a flick of the light switch moment where they realize it isn’t real, that it is all cosmetic and they have been had. They made a life-altering mistake which they now regret. We must help struggling individuals find their identity in Christ and find healing from the trauma that has caused their feelings.