Will You Bow Down? 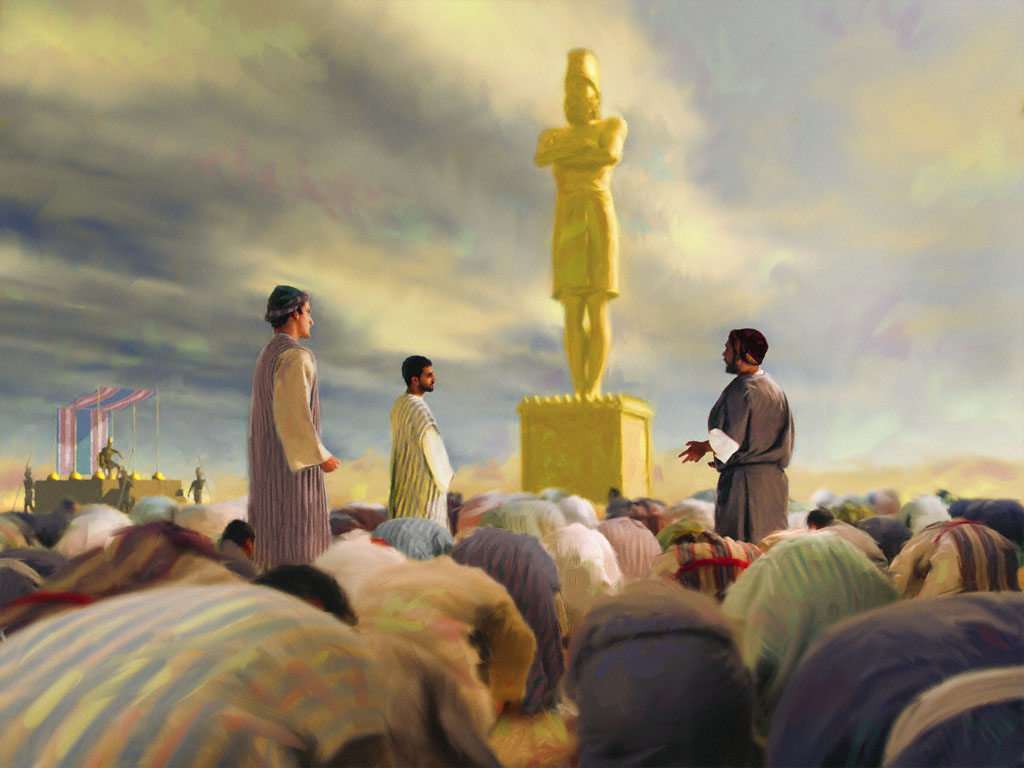 Throughout the course of history humans have witnessed the rise and fall of many nations and empires. As the generations have passed, many of these civilizations were marked by a deterioration in freedom in which there was a mandate to bow to a false god. Though this has been repackaged and sold over and over throughout history, God is still giving us the same test: will you bow down?

In ancient Babylon, King Nebuchadnezzar issued a command to all the peoples, nations and languages under his jurisdiction that whenever they heard the music, they were to bow down before the golden image that he had made and worship it. If they refused, they were to be thrown into the fiery furnace. For the pagans, this likely had little effect on their daily life except perhaps an inconvenience if interrupting a daily meal or a particularly stimulating conversation. However, to the Jew, there was a great conflict. God had commanded them not to bow down to any graven image when He had given Moses the ten commandments: “3 Thou shalt have no other gods before me. 4 Thou shalt not make unto thee any graven image, or any likeness of anything that is in heaven above, or that is in the earth beneath, or that is in the water under the earth. 5 Thou shalt not bow down thyself to them, nor serve them: for I the Lord thy God am a jealous God, visiting the iniquity of the fathers upon the children unto the third and fourth generation of them that hate me;” (Exodus 20:3-5).

Many of the Jews likely obeyed the command for fear of being thrown into the fiery furnace. Many of them hoped that God would be merciful to them. After all, He understood their dire situation, right? What were they supposed to do? Did they really have a choice? Surely God didn’t want them to die. After all, they couldn’t leave their children without parents they might have rationalized. Yet there were three who would not bow the knee, who would not bow down before the golden image. They were willing to give their life. They believed God would rescue them out of the fiery furnace, but even if God chose not to save them, they were willing to die to obey Him. “18 But if not [that God would rescue them], be it known unto thee, O king, that we will not serve thy gods, nor worship the golden image which thou hast set up.” (Daniel 3:18). Most of us know the story: as a result, they were thrown into the fiery furnace and were miraculously saved. Not only were they promoted to higher positions of authority (Daniel 3:30), but the King also issued a decree barring anyone to speak anything against the God of these three men, the true God of Israel.

Interestingly, Polycarp had previously “rejected the teachings of Marcion, an influential heretic who tried to create a ‘new brand’ of Christianity by redefining God and rejecting Old Testament teachings.” (https://www.polycarp.net/). This same heresy is prevalent today. On the one front the culture is redefining God as loving and tolerant of every sin without judgment and, as a result, much of the church is buying into it. If we base our faith on what we see and what we feel, it certainly seems more loving to do so. People love us and accept us when we tickle their ears. This can cause many to swell with pride  as the culture will praise them for being loving rather than reviling them and calling them hateful.

But for many Christians after the ascension of Christ, they were not saved physically from harm, not in this life at least. Consider our dear brother Polycarp, who in the year 155 A.D. was offered escape from death if he would simply declare “Caesar is Lord” and put a pinch of incense into a fire burning before a statue of Caesar. Polycarp replied, “Eighty-six years I have served Christ, and He never did me any wrong. How can I blaspheme my King who saved me?”. Many Christians might have easily rationalized: it’s just a pinch of incense. By doing so I am not actually worshipping Caesar. God knows my heart. But Polycarp didn’t see it that way. He considered that simple act of offering a pinch of incense before the statue of Caesar as blasphemy against Jesus. As a result, he was tortured and burned at the stake.

In addition, much of the church is severing ties with the Old Testament. Andy Stanley was recently quoted as saying “Peter, James, Paul elected to unhitch the Christian faith from their Jewish scriptures, and my friends, we must as well.” Just as we are trying to defend the Sovereignty of the complete Word of God as Polycarp was in his day, so also are we being asked to put a pinch of incense into the fire. Rather than it burning before a statue of Caesar, however, it is a torch burning beneath a pride flag. The culture is demanding that we not only tolerate but affirm and celebrate the LGBT agenda.

Just as we are being called hateful and intolerant today, so were the early Christians. Under Emperor Nero, the Christians were often the scapegoats for natural disasters and were considered to be “haters of the human race”. They were accused of having antisocial tendencies because they didn’t participate in the culture like the pagans did. The persecution under Nero was unlike anything we can even imagine today. Under Diocletian in 303 A.D., Roman Christians were systematically stripped of their legal rights and commanded to worship the Roman gods.

While we absolutely are to love those who struggle, we cannot bow to this agenda. Let me ask you: If we expect to win souls to Christ by celebrating pride or affirming their sin, what Christ are we trying to win them to? What gospel are we preaching? Is it one that lacks repentance? Is it one that is free of persecution and difficult choices? Do you think Jesus would ask you to compromise your faith in order to save souls? Several nurses and teachers (as well as those in other professions) have asked me lately how to respond to the transgenders who are under their care. Currently, in public we can respond however we wish. We are able to stand for our beliefs a little more easily. (I believe that time is short.) But, in a professional setting, now your job is in jeopardy. I have wrestled with how to get around it. How can we keep our jobs without giving in? The reality is many of us will lose our jobs to this agenda. Persecution against Christians is rising. Take, for example, the many florists, bakers, wedding planners, teachers, coaches and more, who have been disciplined, sued, fired or have had some other “corrective” action or punishment brought upon them for refusing to affirm homosexuality or transgenderism.

Never forget, this is not new. As followers of Christ, we should expect persecution. “Remember the word that I said unto you, The servant is not greater than his lord. If they have persecuted me, they will also persecute you;” (John 15:20a). God is our provision. If He allows us to lose our jobs, He will provide for us another way. Millions of our brothers and sisters have been beaten, tortured, roasted alive, fed to beasts, burned at the stake, decapitated and more for the same faith we claim. Are we really willing to lose it all for Christ? “25 For whosoever will save his life shall lose it: and whosoever will lose his life for my sake shall find it.” (Matthew 16:25).

As for me, I will not bow down to the golden image. I will not put a pinch of incense into the fire. I will not kiss the ring of Caesar. I will not raise my hand to pledge allegiance to Hitler. I will not participate in pride festivals and I will not lie to a person in order to affirm a delusion that they have become enslaved to by using their suggested pronouns. I will rather love my God and my fellow man enough to speak the truth in love. True love is self-sacrificing. “Greater love hath no man than this, that a man lay down his life for his friends.” (John 15:13). True love may cost us jobs, relationships, and yes, even our lives. But we love because Christ first loved us. If they persecuted Him, they will persecute us. If you want to love like Jesus consider this: Jesus was the most loving man who ever lived and they nailed Him to a wooden cross.

2 thoughts on “Will You Bow Down?”