The Faith of a Mother 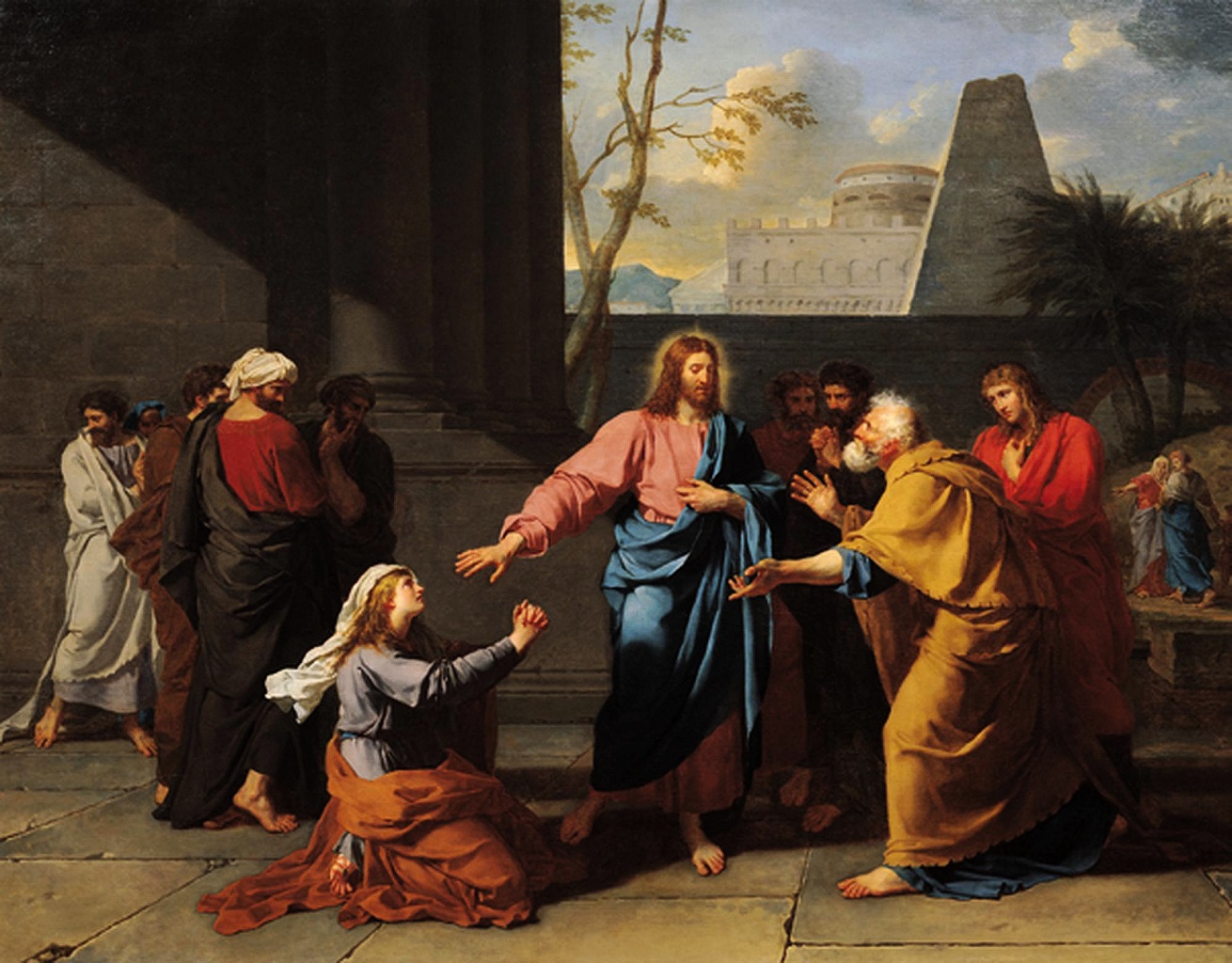 Recently I have been studying in the gospels how Jesus dealt with people. Society keeps trying to redefine morality and label us as the hateful ones. The world that knows a little about Jesus, but rejects Him as Lord often paints Him as a 60’s Flower Child (reference from Janet Mefferd), gushing with emotional gooeyness and never saying a bad word about anyone; perhaps even convinced that He would have told everyone to just “chill out, man”.

I was quite taken aback, at first, as I studied Matthew 15:21-28 on the Canaanite woman who comes to Jesus asking for healing for her daughter.

“Non-Jews were considered so unspiritual that even being in their presence could make a person ceremonially unclean (John 18:28)”1.

In that light, it is interesting that Jesus has just finished a conversation about being unclean. Whereas tradition held that external things were what rendered a man unclean (and thus they underwent extensive ceremonial washing), Jesus said that it is what comes out of a man’s mouth that makes him unclean (Matthew 15:1-20). Therefore, He is laying the ground work that being in the presence of the Canaanite woman would not defile them. He not only meets her, but we know from the Mark account Jesus actually entered her house (Mark 7:24-30).

Yet, His response, if just skimmed over, may at first seem harsh. But we must ask ourselves, what is His motivation and what is the ultimate outcome (which He of course knew)?

The following chart shows the conversation broken down by their responses. (The passage is from Matthew 15:21-28. The numbers in parenthesis below indicate the verse number).

For further explanation on why He calls her a dog, see A Canaanite Woman’s Faith

Note that the disciples tell Him to send her away (Matthew 15:23). Compare their arrogance with her humility. Although He does not stop and grant her request right then, He does not send her away either. Sometimes God seems to turn us away when in reality, He is drawing us close. What may feel like rejection and unanswered prayers may be for a purpose.

The woman comes to Him on behalf of her daughter. Initially, she asks for Him to have mercy on her, recognizing Him as Lord. But as the conversation progresses, she worships Him and humbles herself more and more before Him until she acknowledges that she has no inherent worth for Him to grant her request (because she was not a Jew, and He was sent to the Jews, not meaning she had no worth as a human). But recall, He is already heading toward that region. He knew her need and He had no intention of driving her away. Rather, by withholding what she wanted, it drew her closer to Him and humbled her further. She had to recognize that she was unworthy of what she was asking (as we all are). As a result, she becomes more and more desperate. But as she becomes desperate, she doesn’t become angry and impatient with Him, demanding healing for her daughter. She doesn’t throw a pity party and wonder why He heals others and not her daughter (she had likely heard He had cast out many demons). Instead, she begs for just the crumbs.

God did much the same thing with me. I got to a place where I was so desperate I begged for crumbs. I acknowledged God had no reason to save me: I had rejected Him, mocked Him, shook my fist at Him and spit at Him for nearly twenty years. But in desperation, I threw myself on the mercy of His high court; not because I was worthy, but because I knew He was my only answer. I also knew He had the right to turn me away, and I certainly deserved for Him to turn me away, much more than the Canaanite woman did. But out of His great love, and compassion, and mercy, He saved me.

During the years God was working on me, He had transformed my mom. Just like the Canaanite woman, He first humbled her and drew her close before He healed her daughter. My encouragement to the parents and loved ones of prodigals is this: like the Canaanite Woman and the persistent widow (Luke 18:1-5), humble yourself, draw near to God for your own faith, acknowledge you and your child are not entitled to His mercy. But throw yourself on His mercy and compassion and be persistent, not giving up, but not growing weary or impatient. He may just be drawing you close.

If you look at verse 29, it seems to indicate that Jesus didn’t stay in Tyre and Sidon, but perhaps He had only gone there knowing her need and of her great faith. “And Jesus departed from thence, and came nigh unto the sea of Galilee; and went up into a mountain, and sat down there.”(29)

Take a look at the map here. We don’t know exactly where the Canaanite woman met him, but we know Matthew 14:34 that Jesus had been in the land of Gennesaret (34) and He departed into the coasts os Tyre and Sidon (21). We don’t know exactly where Jesus met the Canaanite woman, only that she was likely from one of those two cities. According to bible-history.com, it was 35 miles from Capernaum to Tyre and 50 miles from Capernaum to Sidon. (Capernaum was just north of Gennesaret). Then, in verse 29 the very next thing recorded is that He came near the sea of Galilee, right back from where He had come from. As far as we can tell, Jesus walked anywhere from 35-50 miles out of His way to heal this Gentile woman.

God will go to great lengths to answer your prayers. It may not be in the timing or in the way you want, but His ways are better. Isaiah 55:8-9 says “8For my thoughts are not your thoughts, neither are your ways my ways, saith the Lord. 9For as the heavens are higher than the earth, so are my ways higher than your ways, and my thoughts than your thoughts.” We cannot judge God’s timing by our present circumstances. We don’t know how long this woman had been praying for her daughter or trying to find Jesus. And the timing is not the same for everyone, but it is for a purpose, for His glory. God was working on my heart and preparing the soil years before I would come home. My mom’s prayers were being answered even though she couldn’t see it.

Think of how many others that had needs He could have attended to. If you read on in Matthew 15:30 it says “And great multitudes came unto him, having with them those that were lame, blind, dumb, maimed, and many others, and cast them down at Jesus’ feet; and he healed them: ” We often think that more is better, that God is interested in great numbers of people all at once. We think He is more concerned with millions than He is with one. Yet, He took the time to go and heal one. He walked between 11 and 16 hours (based on average walking speed, and that without factoring in rests, terrain, needs, etc…) to heal one woman when a crowd of thousands needed Him.

But consider why He did this. I think for 3 reasons:

We know from an earlier account in Matthew 11:20-21, Jesus said that Tyre and Sidon would have repented in sackcloth and ashes if they had seen the works which He had done in Galilee. “20 Then began he to upbraid the cities wherein most of his mighty works were done, because they repented not: 21 Woe unto thee, Chorazin! woe unto thee, Bethsaida! for if the mighty works, which were done in you, had been done in Tyre and Sidon, they would have repented long ago in sackcloth and ashes.” Jesus knew His ministry was first to Israel. But by healing one woman of great faith, she may have told many. There are other accounts in the other gospels of multitudes from Tyre and Sidon following Him, perhaps this one woman not only received the healing for her daughter she so desperately sought, but a powerful ministry with which to glorify the Lord by proclaiming what He had done.

Psalm 107:2 “ Let the redeemed of the Lord say so, whom he hath redeemed from the hand of the enemy; “